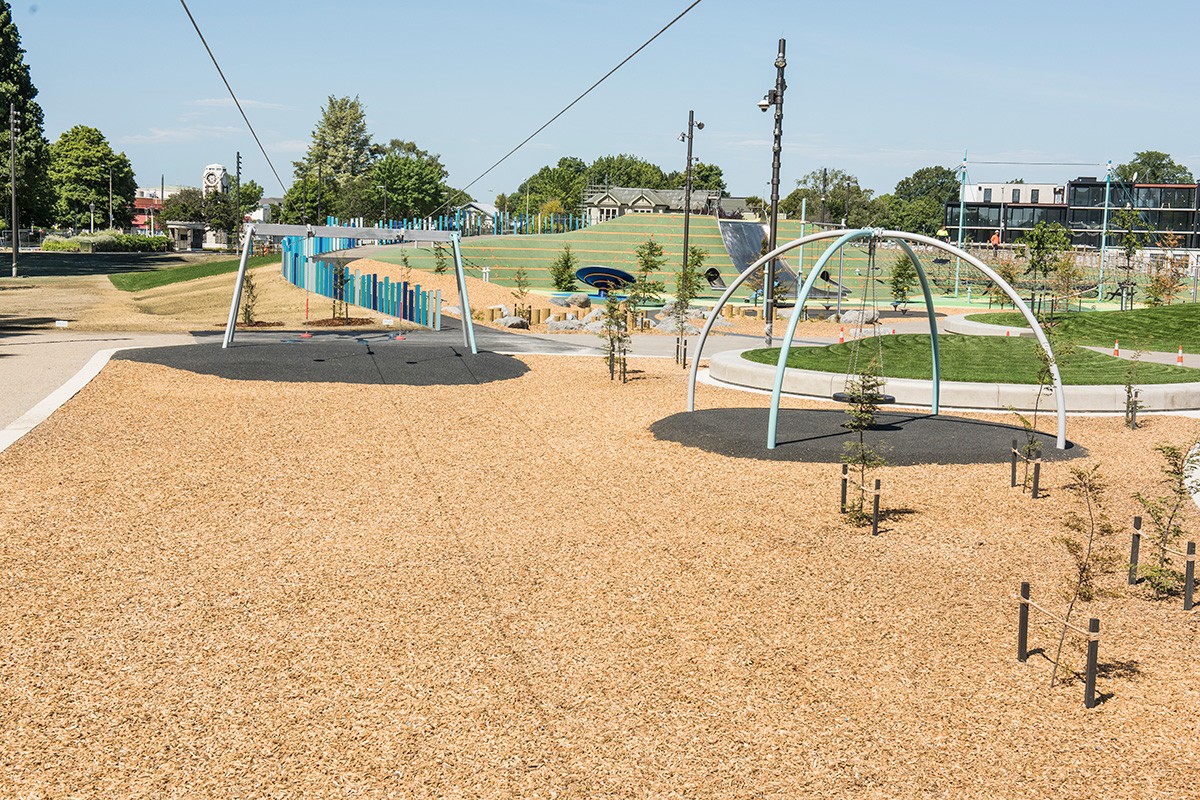 Playgrounds are a place to meet, share, strive and learn. There’s a good reason why these areas are called ‘community assets’.

The Margaret Mahy Park in Christchurch was undoubtedly the most exciting and challenging play surfacing project we have worked on in recent years. As a major development post-earthquake in the Garden City, it has also been one of the most important ones.

The origins of this work started back in 2013 when the ideas from over 6,000 Canterbury children were evaluated as part of a citywide initiative to design and build a world-leading urban playground in Christchurch. The winning entry was based on the stories of Margaret Mahy, an esteemed local author whose books have enraptured generations of Kiwi kids. Play Video
“I have found the product very good to work with and impressive in terms of durability. There haven’t been any issues with colour fade either. From a maintenance point of view, it is fantastic. We use a leaf blower daily for sand and bark chip removal and it cleans well with water for other items such as ice-cream, sweet drinks etc. We have extraordinary visitor numbers through the playground each year and I feel that this is a real credit to Numat and the quality of the product they offer.”
Chad Dix
Supervisor Inner City Parks Christchurch City Council

From the initial inspiration, provided by designer Catherine Hamilton, it was then a matter of ensuring the playground surfacing was practical, durable, and usable for all ages.

“From a surfacing design perspective we were very much involved, particularly with the product specification, planning and working out how to join the various surfaces in a seamless and durable manner,” says Numat Sales Manager James Rawnsley.

Tina Dyer, the owner of playground design and certification business Park Central, worked as a consultant on the design along with head designer Catherine Hamilton on the project.

“After the success of that project we worked with her on a number of projects where the product has been used, and she was happy to see it used in Christchurch.”

From the perspective of customer communication, a lot of back and forth occurred, and James and Numat General Manager Jacob Judd were on site every week from October through to December.

With multiple colour patches and patterns, along with different angles, elevations and materials, adhering to the design brief through to the final pour meant ongoing site diligence.

“It was a huge team effort,” says Jacob. “Virtually every member of Numat was involved in some way or another, and we had a core crew of 22 working consistently on the playground.”

“From our team guys like Tony and Myles were in there making it happen, up to their elbows in everything,” says James. “When we took on the task of rebuilding the city we agreed that a place to play and relax in the centre of the city would be of huge value to families.”
Gerry Brownlee
Earthquake Recovery Minister

After all the hard work it was then a matter of stepping back and seeing it all in action. The playground had some capable testers for the surfacing and equipment, with The Press reporting that, “staff from the Canterbury Earthquake Recovery Authority (CERA) had a quick test run of the playground… the double flying fox, slides and seesaws proved popular among them. Construction workers seemed to prefer the wetland area and various spinning objects.”

“It was a fantastic day,” says James, ”The fanfare and excitement on the day was appropriate given the work that had gone into it (the playground). The clowns and performers really set the scene and reminded everyone as to why we were all there – to celebrate play in the central city.”

Now everyone has managed to catch their breath the Numat team are proud of the results and excited with how the playground has become such a destination for locals and visitors alike.

“This is one of the most intricate Pour’n’Play projects in the world,” says James Rawnsley. “Nothing like this has ever been done in New Zealand.”

In regards to the size and scope of the centrepiece mound James says, “there is one in Sydney that I know of, but nothing like this.”

“We’re always confident of the work and product quality,” says Jacob. “But with such a multifaceted job like this you never know how everyone will respond once it’s completed.”

He needn’t have worried. Feedback from CERA executives Bruce Apperly and Peter Matthews was extremely positive on the day, as was the response from CityCare and other companies from within the joint venture.

“They’ve already had a number of enquiries as to the surfacing on the playground – which is great news for us,” says Jacob. An Interview with the Designer With the great community being created at Bonair Reserve in Auckland, Numat had the opportunity to work on the exciting new playground for the space with our Pour’n’play product. Kopupaka Reserve playground in Westgate, Auckland was the 2021, New Zealand Parks Awards, Playground of the Year. The playground ‘wowed’ judges with its mission to prevent emissions and support local climate change, as well as its vibrant colour and edible plantings. Built with the aim of increasing the accessibility and interest of Parliament to children and young families, the Parliament Playground consists of a main feature slide, timber steppers, and timber balance beams. In the SuperCity of Auckland it should come as no surprise that the suburb of Waterview is now home to what can only be described as a SuperPlayground.